How Condos are Designed with You in Mind

So if we’ve ever met, if you’ve read my blog, or even had a passing conversation with me then you already know… I’m obsessed with Toronto’s neighbourhoods.

I love the idea of uniquely-Torontonian cultural enclaves, of pockets of different people and lifestyles co-existing in the most diverse city in the world.

Sound boring? I hope not! Pre-construction condos are one of the only products sold before they’re secured - and so branding, marketing, and concept matters a lot. And since they’re one of the most expensive purchases people ever make, we should look at how developers may be trying to sell directly to you.

I’ll make it short; a history of condos would make a terribly boring documentary, wouldn’t it? But in the last ten to twenty years, the real estate market of the GTA has completely and utterly changed, shaping condo branding as we know it now.

Between 1991 and 2001, the GTA population soared from 6.5 to 7.7 million. Newcomers settled into sprawling fresh developments outside of the GTA’s main city centres. Areas that were farmland, marsh, or just plain empty space became, very quickly, massive development pockets.

City and provincial planners began to worry about the future of Ontario’s nature.

The Greenbelt Protection Act (2004) and the Greenbelt Act (2005) followed soon after; it provided permanent protection to Ontario's greenbelt, becoming one of the largest and most successful green spaces in the world. 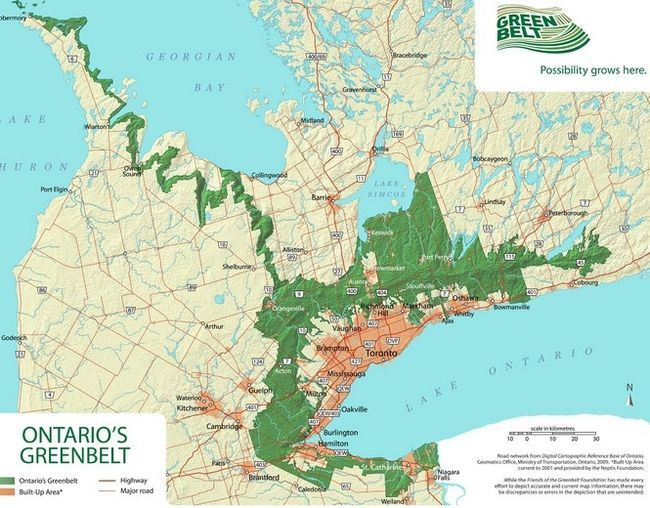 The government expected settlement patterns to adjust: either new residents would move outside of the protected areas, or increase density in already-populated areas (called intensification).

And that’s what happened. Fewer single-family homes were (and are) built in the GTA. Instead, tons of high-density housing became necessary to support a growing population.

So what does that have to do with neighbourhoods and branding?

Intensification is a relatively new phenomena here in Ontario. Developers and legislators are still catching up, trying to figure out how best to accommodate the 3.5 million people expected to move to the GTA by 2040.

It’s required a bit of a cultural shake-up, too. Condos haven’t been homebuyers ideal solution. If I had a dollar for every time a condo naysayer told me they “didn’t want to own land in the sky”, I’d have a strategic and steady passive income stream ;)

But that’s changing, with the help of condo branding. Developers are doing their best to make their condos fit in with the neighbourhood. They’re incorporating green spaces, heritage facades, art galleries, and amenities, all to ensure buyers will be attracted to high-density living.

To make condos appeal, and therefore sell, developers are approaching neighbourhood culture and asking, “How do we fit in with these people?”

How marketing a condo works

I wrote a whole blog post on the process of building a condo in the city, but here’s the gist:

They find a plot of land, they review bylaws and population, and they evaluate the economic viability of a condo building there. Can they sell a hundred new homes? Can the neighbourhood support this population? How much will it cost?

They find out their audience

You might think that all people in the market for a pre-construction condo are similar. And in some ways, they are. But because of intensification, and the lack of available detached homes, condos’ market appeal is broadening. Buyers vary more than they ever have.

Are there lots of schools, grocery stores, and parks? Market to families.

Are there more clubs, restaurants, and fitness studios? Aim for the hip, under-30 crowd and investors.

Audience profiles are more detailed than this (and may not match the exact, current neighbourhood demographics; look at Daniels and Regent Park), but that’s where to start. Here are some great examples of neighbourhoods and their respective new developments.

Full disclosure: I’ve sold units in a few, but definitely not all, of the below developments. I have only included examples that I thought were interesting and relevant to this topic, not because of any relationship with developers. I do not receive any compensation for anything I post on my website or social media accounts. Carry on!

The Village - Eighty-One Wellesley by Aragon

The result? Smaller and cheaper units. Rental- and student-friendly accommodations for one and two. Fewer family spaces and amenities. Floor space at a premium.

Okay, so I’ve shown this floorplan to a few people, and we’ve marvelled at how narrow it is. But over the last few days I’ve been re-thinking about it this way: what if I was 21, had just moved to my own space, and was hitting up citylife for the first time solo? This would be my dream pad!

You can tell by the design, too. The esthetic is modern, sleek, and minimalist. It’s not too luxury-focused. Instead, it’s functional. Perfect for ultra-Millennials. 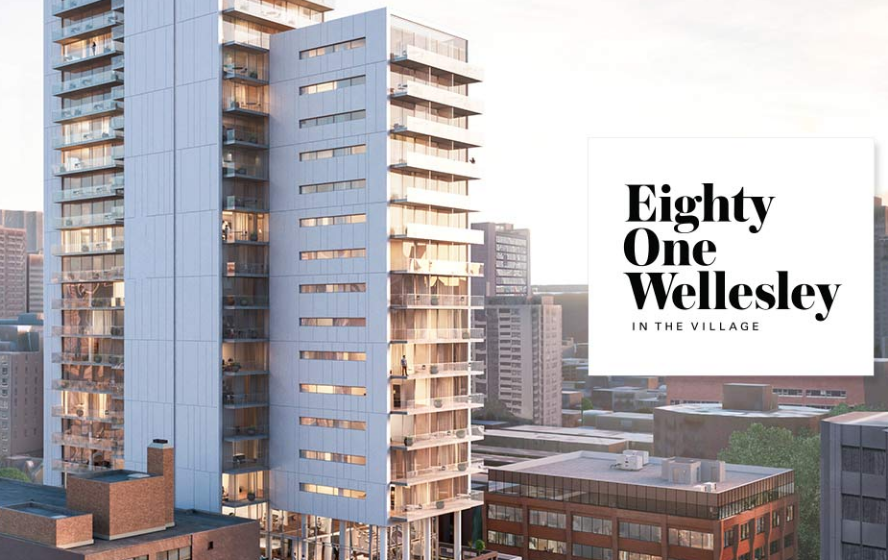 The Village - Stanley by Tribute Communities

Another Church-Wellesley Village pre-construction condo. It has a similar - but not the exact same - audience. 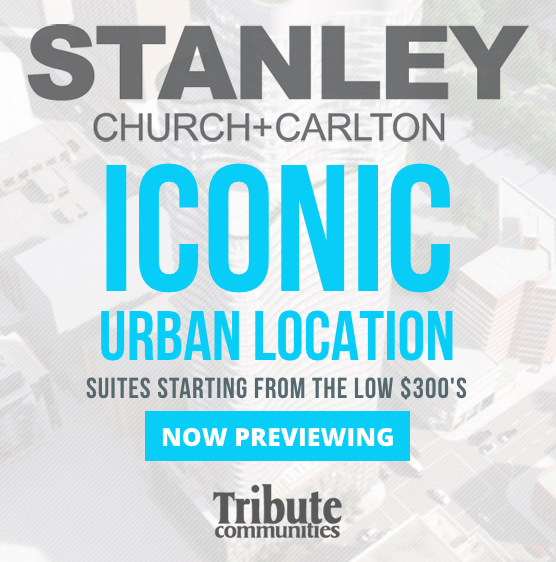 Stanley’s branding is modern, sleek, and tailored to a young audience. It’s lower-priced than other premium condos, while also being accessible and hyper-urban.

It’s an interesting deviation from Eighty-One Wellesley, though: many more amenities, with a focus on party- and social-focused spaces. Also, a zen garden!

Take a look at this (totally different) floor plan: 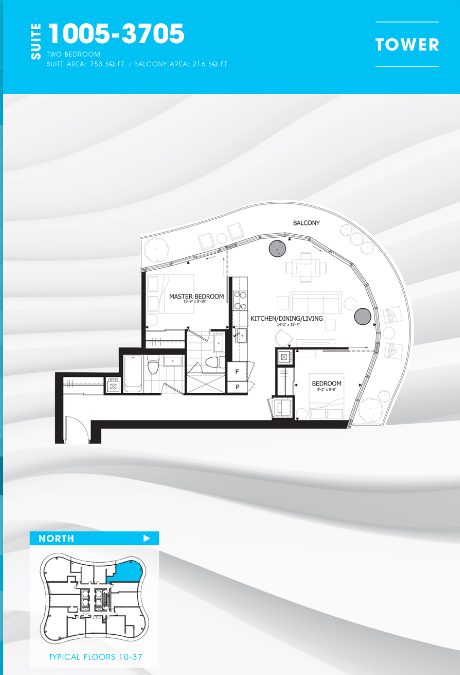 Stanley doesn’t offer studio spaces, and instead focused on larger one-, two-, and three-bedroom spaces.

From the balcony, the amenities, and the uniquely organic building shape, it looks like Stanley is aiming for the Apple generation again. This time, though, it’s for people who would like to live with roommates, for couples, or for investors looking for larger spaces.

It’s trendy, but unassuming. It could even be seen as anti-luxury. Instead, it goes for fun party vibes. Compare it to one of Yorkville’s many new developments:

I feel Avenue 151 (or Yorkville, for that matter) can be summarized by this one artists’ rendering: 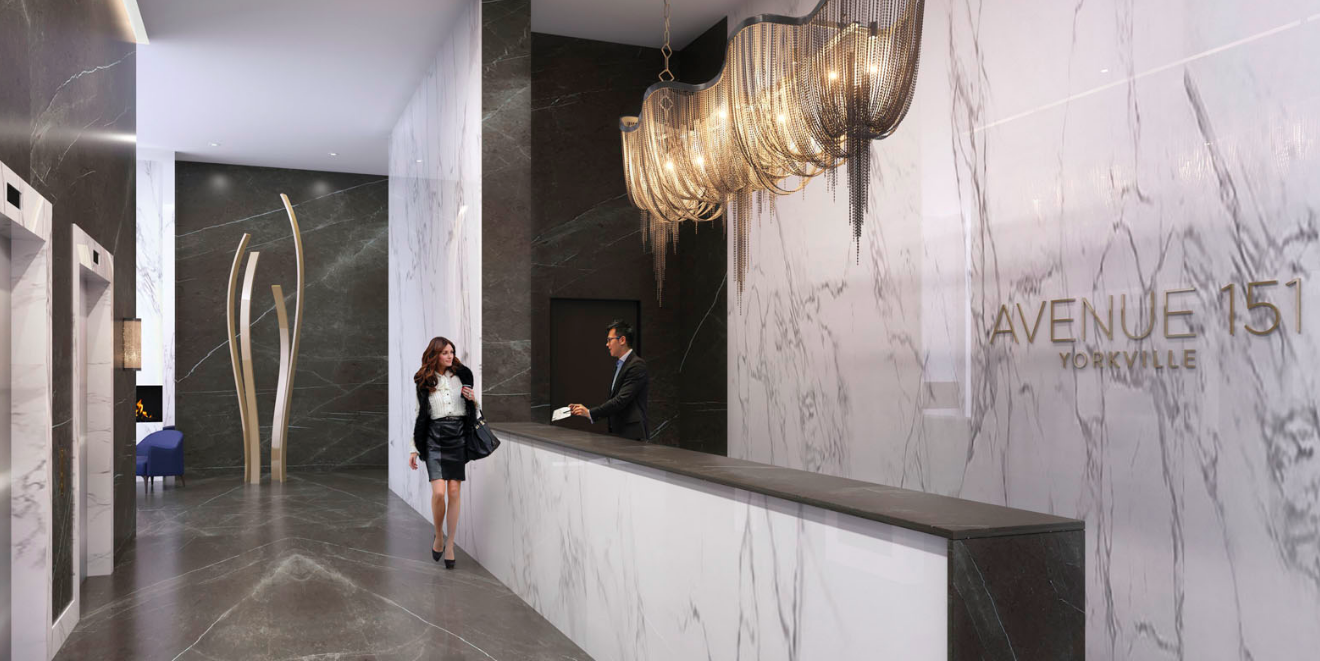 Obviously, Avenue 151 is aiming for a much different audience than Church-Wellesley condos. This development will be located “Where Yorkville meets the Annex”, and its advertising is closely tied to Yorkville’s reputation. Why? Because they’re looking for affluent buyers. Luxury-focused, with premium materials and chattels, and no available floorplans (yet).

Their website prominently features nearby restaurants and shops, positioning the development as lifestyle-focused, premium, and classically luxurious.

Would you say this is the Yorkville identity? Compare it to Etobicoke:

Etobicoke - Vita on the Lake by Mattamy Homes

Parkdale, Roncesvalles, and Mimico-area pre-construction condo developers have had their work cut out for them when it comes to developing for the neighbourhood. Much like the “Keep Kensington weird” movement, residents love Parkdale for its history, its quirky identity, and reputational distancing from cookie-cutter downtown development.

For developments in the area to be successful, they have to respect the neighbourhood and the residents, while also providing a product that condo buyers want.

Vita on the Lake by Mattamy Homes is a great example of “fitting in”. They’ve carved out a niche for nature-loving, downtown-working, almost-suburbanites; just the kind of people who are likely to want to live there.

Its tagline is “Life, Uncomplicated”. The branding echoes this with minimalist text, with greens, blues, and waterscape imagery to convey its nature-focused esthetic. The massive balconies are meant to take in full views of the Lake. 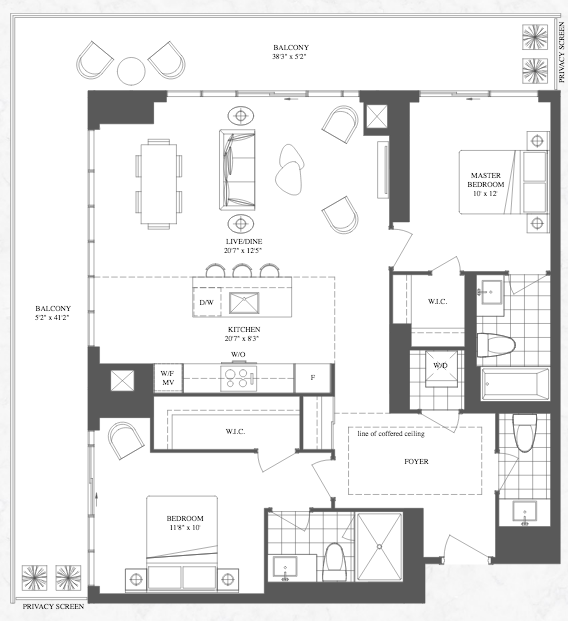 The square footage is impressive. And so is their commitment to multi-bedroom units. Each unit also features walk-in closets, even in non-master bedrooms. Vita isn’t meant for students or singles. It’s for families, for buyers who want both in- and out-of-unit space. It appeals to cyclists, nature-lovers, and crunchy granola folks with aren’t deterred by new construction - and, instead, are swayed by house-like living in a condo.

So what about investors?

I’d like to emphasize how different condo projects aren’t “better” or “worse” than each other (developers, on the other hand…).

Instead, as investors, we need to examine our own audience - our future tenants. Are we looking to list our investment properties on AirBnB? Rent to students? Families? Long-term or short? Will my tenant need a parking space? What amenities are they looking for?

As investors, we’re not just buyers - we’re marketers, too. And condo branding is all about marketing. We shouldn’t be sold based on whether a condo is marketed to us. Instead, we need to buy based on what tenants we want, and what those tenants would want.

I’d love to chat more about condos, marketing, and branding for pre-construction. Send me a message and we can go for coffee!