How Will the Fair Housing Plan Affect Investors?

Toronto housing is on everyone’s radar. From the CBC’s No Fixed Address series highlighting what it’s like to be a renter in the city to some freshly-proposed provincial housing legislation (all outlined below!), it’s been a hectic few months of changes in one of Canada’s most expensive cities.

Since the 1989 housing crash (and the beginning of recovery, around 1996), housing prices have risen steadily in the GTA. A number of factors have contributed to this climb - many of which I’ll outline below, along with the new legislation - and we need more information to accurately analyze the situation.

The situation being: are we in a bubble? As investors, it’s important to understand both best and worst case scenarios, as well as how the new proposal impact our existing properties and potential future investments. 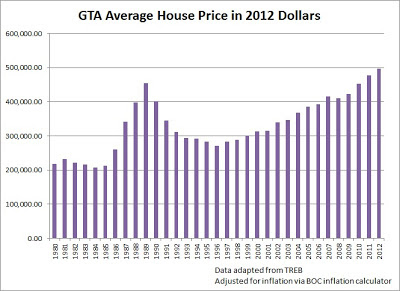 What are experts saying?

A 2016 RBC analysis found four factors that they say accounts for *national* housing price increases over the last two decades. They are:

In 2012, though, the Bank of Canada did a similar study and found four different factors:

Even with a four year difference, these two analyses came to very different conclusions. And I, too, have come to some of my own, albeit from a GTA investors’ perspective. There are a number of different factors that affect our real estate market, and it’s impossible to fully identify “causes” factually and responsibly.

I’ll run through some of the major causes with as many details as possible and citing sources where applicable so you can come to your own conclusions.

One of the big reasons for the rapid price increase in 1989 was a surge in Toronto-area immigration. This also impacts our real estate growth today, although in reality it looks a little different. In 1989, immigration slowed, and real estate speculators weren’t prepared to carry housing inventory for longer than anticipated. To offload, many had to sell at a loss, triggering a drop in real estate prices.

Today, though, the population increase is looking to continue. Estimates say that the GTA population will increase by 3.5 million over the next 20+ years. That’s almost 150% in two decades. This boom comes with a desperate need for all types of housing - rentals, condos, single-family detached homes, and micro-apartments. And while we’re building a lot (more on that below), we’re not keeping pace with the demand.

Which leads us to… low rental vacancy

There’s a certain amount of construction necessary to support the influx of immigration to the GTA. When new construction doesn’t keep pace, demand increases, and prices increase. With the increase in price, and increased demand for housing, we end up with an extremely low vacancy rate for rental units - 1.7% of all rental units in the city are unoccupied at a particular time.

The CBC is calling it a “renters’ renaissance”. As ownership becomes more unaffordable, rentership is one of the only other options. And in Toronto, it’s about $177 cheaper per month to rent a unit than to own that same unit. Cue way more renters in the market.

The effects are twofold: with more demand for rental housing, investors are more likely to hold onto properties that they can make safe, reliable rental income from. Alternatively, the value of housing assets increase, since owning a rental property is a steady, passive money generator. Both increase the cost, and demand, of housing.

Which leads us to… a lower supply.

Market speculators aren’t just for investors with rental properties. Many homeowners are holding onto properties in anticipation of climbing prices. Why sell your home when it will be worth 20% more in a year? A reasonable question.

The asset growth and income possibilities are a likely factor in Toronto. Active resale listings were at their lowest in sixteen years as of December 2016, and we’ve hit record lows a few times over the last couple of years. Low supply, high demand, and a fear of missing out.

Which leads us to… why aren’t we building more?

There have been concerns about overbuilding over the last few years, but with the understanding of the above, it seems we’re in a precarious situation of a lack of housing, not a glut.

Most GTA ground-level housing construction (townhomes, detached and semis, “houses” in general) is happening outside of the city of Toronto - Peel and Halton, in particular. Total new housing starts for all dwelling types were at their highest in 2015 with 44,047 units. Not even fifty thousand. In order to build a single home for every 3.5 people coming to the GTA over the next twenty years, we’d need at least 50,000 units built every year. We’re not building enough to meet demand, and as that continues, prices will continue to rise.

Some builders may be running into trouble with the Greenbelt Protection Act, a land-use arrangement as part of Ontario’s growth plan to limit construction in protected areas.

It’s… arguable. In some ways, the Greenbelt has made it harder for builders to construct more ground-level housing, which has led to increased density (and more high-rise construction) in other areas of the GTA. Some experts have argued that it plays an important role in the hot housing market, while other say it’s merely a symptom. Ontario may require too much red tape in general, making it riskier and costlier to build any sort of housing, much less affordable housing. If this is the case, then the Greenbelt isn’t the problem.

Infrastructure is another barrier. According to the Neptis Foundation, we don’t have a land shortage for new construction, even with the Greenbelt Protection Act. Instead, building on undeveloped land adds a massive burden of cost for infrastructure. Our existing roads, schools, utilities, hospitals, and other infrastructure in Canada each need a hefty cash injection, and new construction of these are incredibly expensive.

Which leads us to… the Fair Housing Plan

So what does this mean for you, an investor? Let’s look at some of the bigger pieces of the proposal.

Landlords of new condos (and investors like you and I) won’t be able to increase rent as a result of increased costs, like a jump in maintenance fees. Yearly, we can only increase rent by the rate of inflation, capped at 2.5% (even if inflation is higher!)

This is good news for tenants seeing their rents skyrocket by 50-200%. Less so for investors who are both competing in price against their neighbours and now may be forced to rent below their carrying costs. In addition, the new process for gaining approval to increase rent higher than inflation may make it more difficult to fight for a fair rental price even in necessary circumstances.

Federation of Rental-housing Providers of Ontario (FRPO) president and chief executive officer Jim Murphy thinks the proposal could be damaging to the future supply of rental housing. Small investors may find investing in rental units to be too risky, which would reduce rental supply rather than increase it. In addition, there are a number of units currently under construction and this proposed change will impact buyers who have yet to take possession.

Still, landlords will be able to name their price for vacant units - and so unit turnover can mean you can do a price reset. As long as you’re strategic about setting your rent and choosing your tenant in advance (and I can help you!) you should be fine.

A more transparent and standardized rental process is good for everybody, I think. While it means we’ll likely have to switch up some paperwork, it’s not a major hit or miss for me. The only caveat is that the new lease will make it more difficult to evict a tenant for re-possession reasons (as in, you want to live in your unit or a family member to do so). It just means landlords have to be very careful about deciding to lease a property and have a long-term plan in mind.

These two are combined somewhat. One issue that comes up with foreign ownership is the idea of “ghost neighbourhoods”, which is when foreign owners don’t need to rent out housing because it’s making enough money just sitting empty. This reduces both the rental and market supply, and both taxes are aimed at curbing this.

Interestingly, foreign ownership hasn’t been proven to be a major factor in either Toronto or Vancouver housing prices. Less than 5% of purchases in the GTA are by foreign investors, which isn’t a particularly big number.

My advice: don’t panic. There’s nothing in the Fair Housing Plan about domestic speculation, including investors who rent out one or more condos that they own. We may - over years - see more rental units come to the market as a result, which may impact our access to tenants. For now, though, this won’t impact domestic investors and likely won’t have an impact on selling price.

Selling your condo “on assignment” is something I only advise as an exit strategy. In fact, I always negotiate for the ability to do so just for the added safety net. If something goes wrong between signing an agreement of purchase to the day of occupancy or possession, then selling on assignment is a last resort.

The Fair Housing Plan is pretty vague about how they plan to go about tackling shadow flipping. They’re going to start monitoring and collecting data from homebuyers, and so the first step for them will be to assess whether shadow flipping is contributing to the hot market in the first place. For now, there isn’t too much to worry about.

I’m not totally thrilled about the proposed changes. It makes a few things harder for investors and landlords, and makes investing in rental properties a little riskier. If the goal is to increase the number of rental properties on the market, I’m not sure if this is the right way to go.

My ultimate position is this: Don’t panic. Stabilizing the housing market is good for everybody in the long run. If the plan helps more people get off the subsidized housing list (currently at just under 180,000, with an average wait of four years) and improves the quality of life for most Torontonians, then that’s great.

Since pre-construction investors like you and I aren’t paper flipping and aren’t letting empty houses sit idle, then we’re actually in a good spot - helping add more rental properties to a low-supply market and encouraging development from our neighbours.